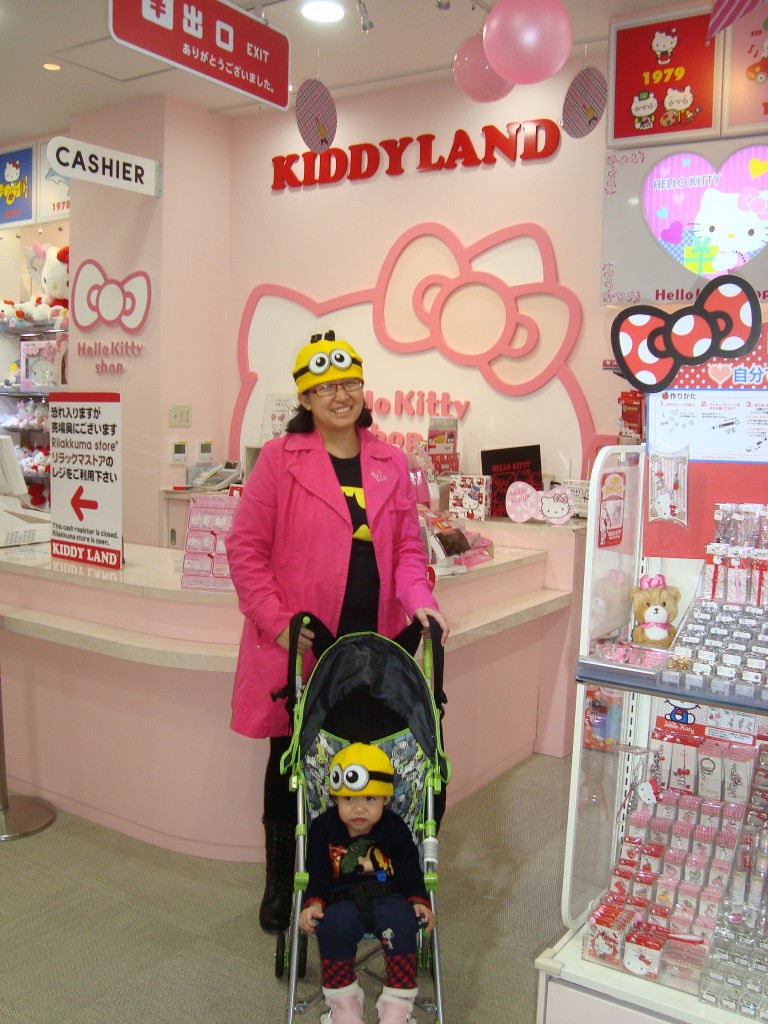 Ah, Japan! No other country in the world has piqued my curiosity like this place has. For years, I’ve consumed so much of its culture — from anime to food, little trinkets to beginner Nihonggo lessons. It was one of those dream destinations I had as a teen that I was finally able to go to as an adult…and with a baby to boot. We decided on going to Tokyo for Jellybean’s second birthday, not just because I’ve always wanted to go there but because of her love for animals — cats, in particular. It was just the naturual choice given Japan is home to Hello Kitty and the birthplace of cat houses and cat cafés.

But how did it fare in our Baby-Friendly Meter? Sadly, not as well as we had hoped. We give it only a 8/10. We’ve talked about what a wonderful baby-friendly country Singapore is and that is always a good place to start the comparison. As with most parents who choose to travel with younger kids, gate checking the stroller has become common practice. Expect that your stroller will be among the things you have to wait for at the baggage carousel when you arrive at your destination. When you arrive at Narita Airport, expect to carry your baby or let him or her walk alongside you. If you are riding with JAL, you’re in luck because you can arrange for a stroller. If not, then a little patience goes a long way because Narita is a huge airport.

Do note that most international flights are routed through Narita Airport but there are more expensive options that can land you in Haneda which is closer to the city. Narita is a good hour and a half away and if you’re traveling with an infant, that trip alone can cause untimely tantrums. Nex Train from the Narita Airport

When you get to the airport, you will have four options to get you into the city:

Japan’s transport system is extremely efficient, but you need to be really good with directions as it can get confusing. Get a hold of the train system map as soon as you arrive at the airport. Find a copy that combines the railway, the subway and the bus lines and map out your route so you know where to get down. For those traveling with babies, this is where we score the country low. When it comes to the Metro Rail and JR train systems, they are not all accessible by elevators. A stroller, which is my best friend when moving around with a kid, becomes a liability instead of an asset. Aside from carrying the baby up a flight of stairs, you also need to think of how you will drag that one bulky item. A sling or a baby carrier would have been more useful for this trip.

TOKYO TIP #2: Prepare for the weather.
This a country with 4 seasons. We were there in mid-February right after a major snow storm. Which meant 2-degree weather anywhere you go. The cold can be biting and the snow slippery. When traveling with a baby to Tokyo, you need to make sure you can bundle up your little one. 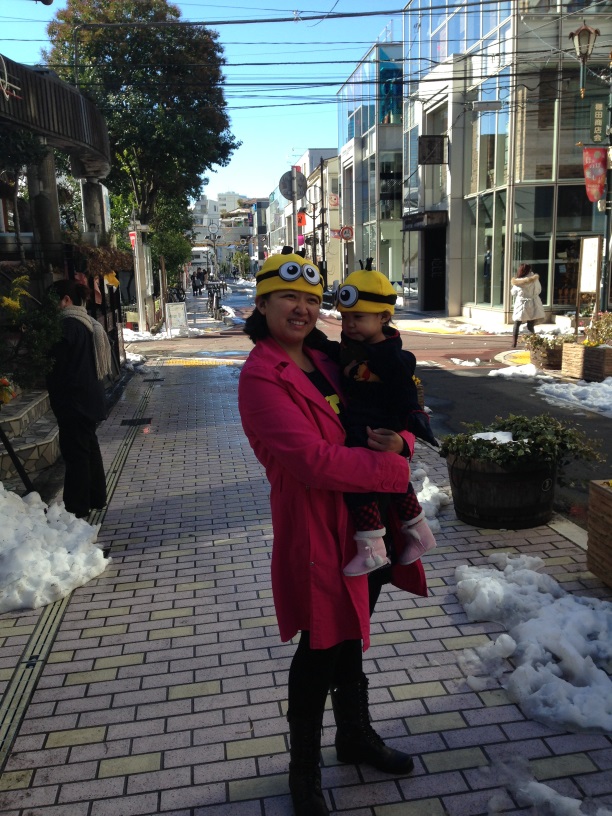 TOKYO TIP #3: Have the budget for it.
For several years now, Tokyo has bagged the top spot as the most expensive city in the world. Before you take that trip, make sure you have the budget for it. Aside from the expensive plane fare to get there, a day can easily run you up to ¥10,000 for food, hotel and transportation.

Speaking of money, get your Pesos changed before you board the plane bound for Japan. Unlike most countries, money changers are hard to come by in Tokyo. Even more difficult is getting your Peso changed to Yen, you may want to carry US Dollars instead of the Philippine currency if you are unable to get your Yen before you leave.

One more thing, carry change when you go out. Tokyo is known for its quirky vendo machines (that are found in even the oddest places). You may want to taste that weird-sounding soda or maybe even grab some fresh, hot ramen right at the train station. Make sure you have loose change just for this. There are also vendo-type restaurants that would let you choose your meal before going into the establishment — drop in a few coins, pick your food and out comes the ticket. When you step into the restaurant, hand the order ticket to the counter and you’ll get your food in as little as five minutes. This is a wonderful way to bridge that language barrier because you get to choose your food just with pictures! 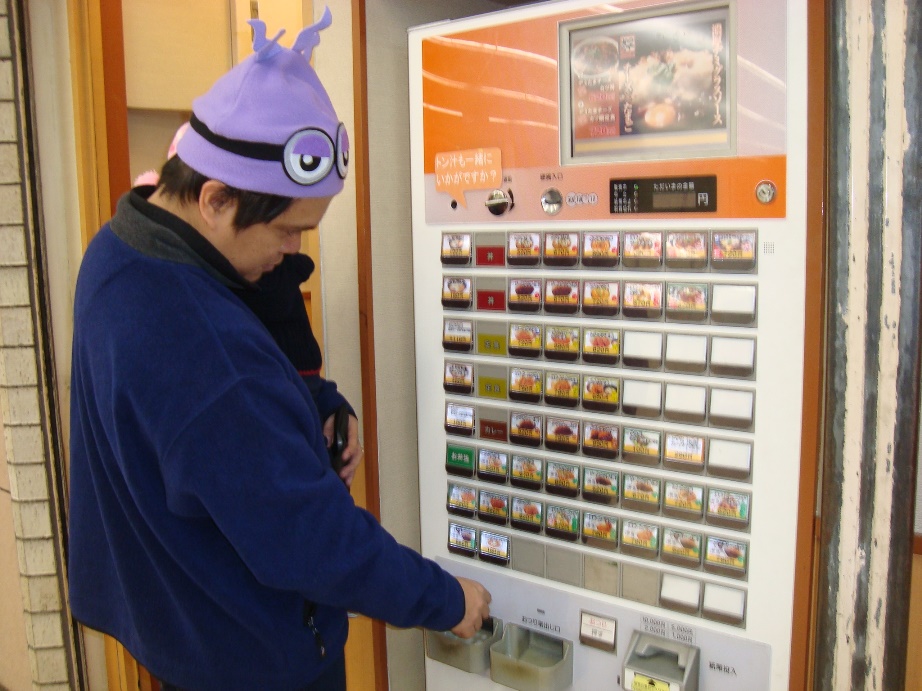 Vendo shopping for dinner. Average price is about ¥700 for a rice meal. 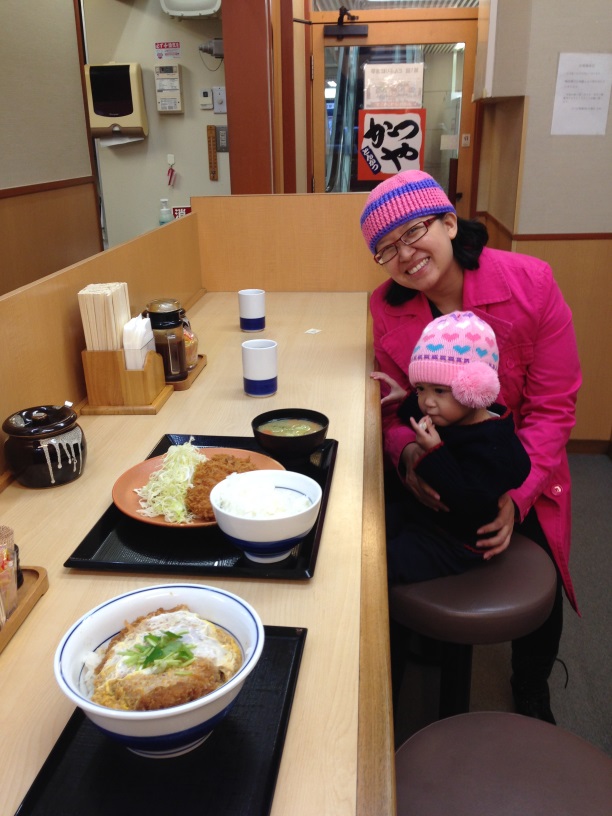 Well, this isn’t really just for Tokyo, but for any trip you take with small children. Tokyo can be many things for different travelers. It can offer you a phenomenal pop culture experience, immerse you in unique culture, feed your technophile fancy and many other things. Here’s what we did in our 3-day Tokyo trip with our toddler:

Day 1: Harajuku
Like most of the contrasting elements of Japan, you’ll find the fancy Omote-sando shopping area right beside the Takeshita-Dori — the center of cosplay and youth culture of Japan.

Omote-sando is their version of Champs-Elysees with the high-end stores along a kilometer-long stretch, tree-lined avenue with the top brands from around the globe. The largest Louis Vuitton store is found here. Most stores open late (from 11am onwards), so arriving early gave us time to go souvenir shopping in Oriental Bazaar on this street. This huge three-story building holds everything quintessentially Japanese — from pottery to paintings, antiques and tchotchkes — all right within a decent budget. Our top find were the yukatas (summer kimono) which cost us ¥1200 for the toddler version and ¥4500 for the adult version.

Kiddy Land is also in this street. This is a must-see for those traveling with small children. It is Tokyo’s most popular toy store. The five-storey building has every cartoon character imaginable. It has separate floors for Snoopy Town and Hello Kitty Shop.

Intersecting with Omote-sando is Takeshita-Dori, the heart of Harajuku culture. This pedestrian-only street is lined with boutiques, cafes and restaurants representative of everything young Japan. If you’re there on a Sunday morning, you might find some teens in their full cosplay gear. 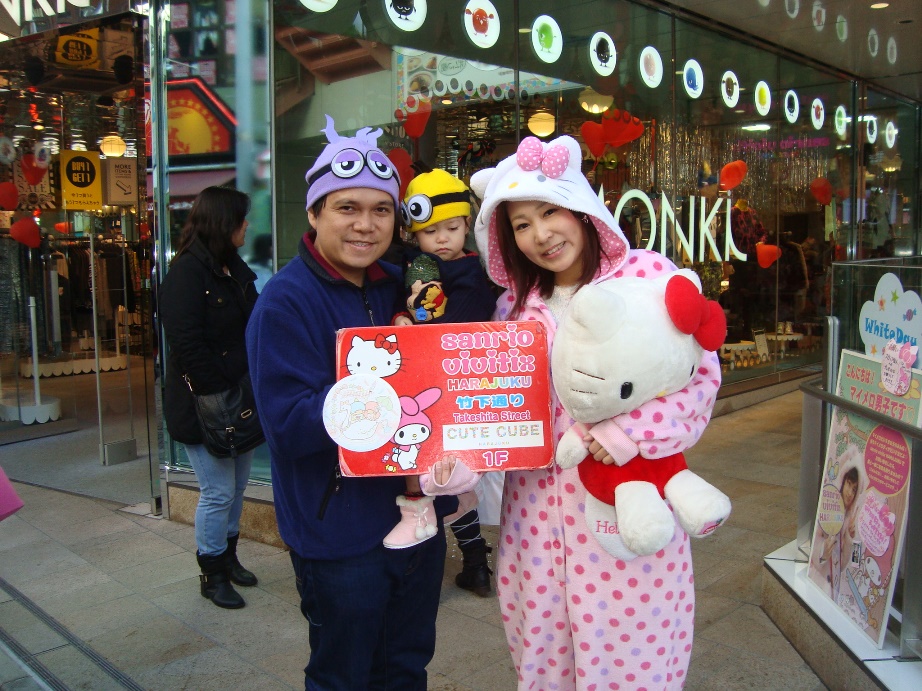 In Takeshi-Dori, home of cosplay and Japan youth culture.

Day 2: Ikebukuro
Another popular tourist destination for those with children, Ikebukuro is home to Sunshine City. This is a a 60-storey entertainment center for kids and adults. The top floor of the building has an observatory. To access this, you will need to brave your fear of heights and ride the world’s fastest elevator which ascends the building with a speed of 600 miles/hr. See how fast we were going? 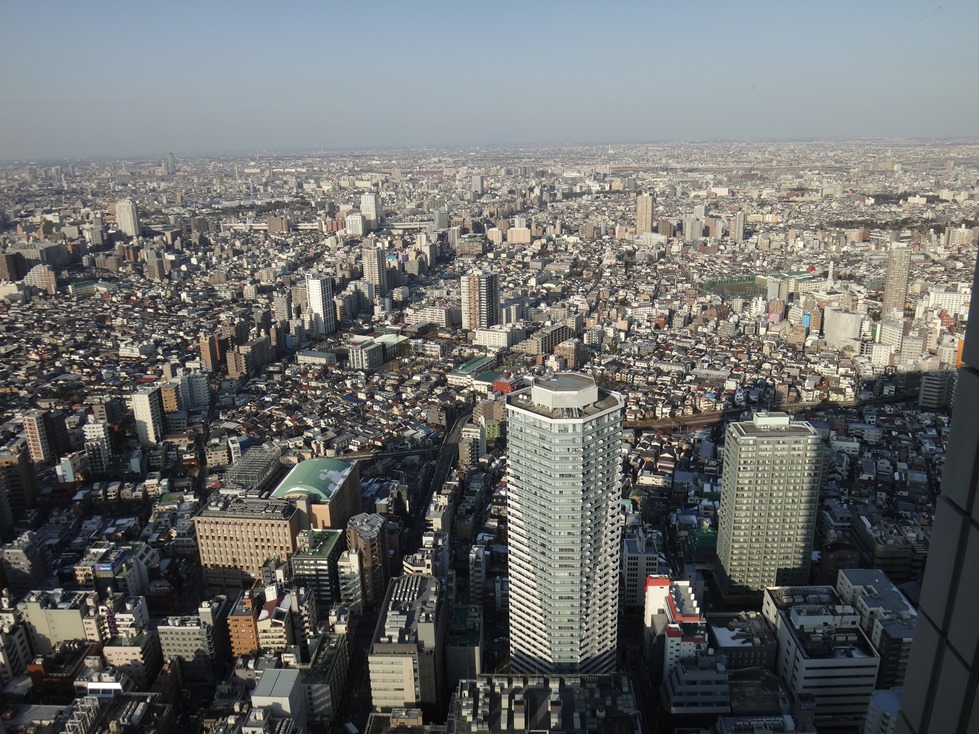 View from the top of Sunshine City

This commercial complex also has a state-of-the-art aquarium, a planetarium, a theater, a museum and an indoor theme park called Namco Namja Town. This is one of the few baby-friendly establishments in Tokyo – everything is easily accessible and you can even borrow a stroller by leaving an ID. Here, you’ll find the 8-storey Tokyu Hands which has literally everything you need. 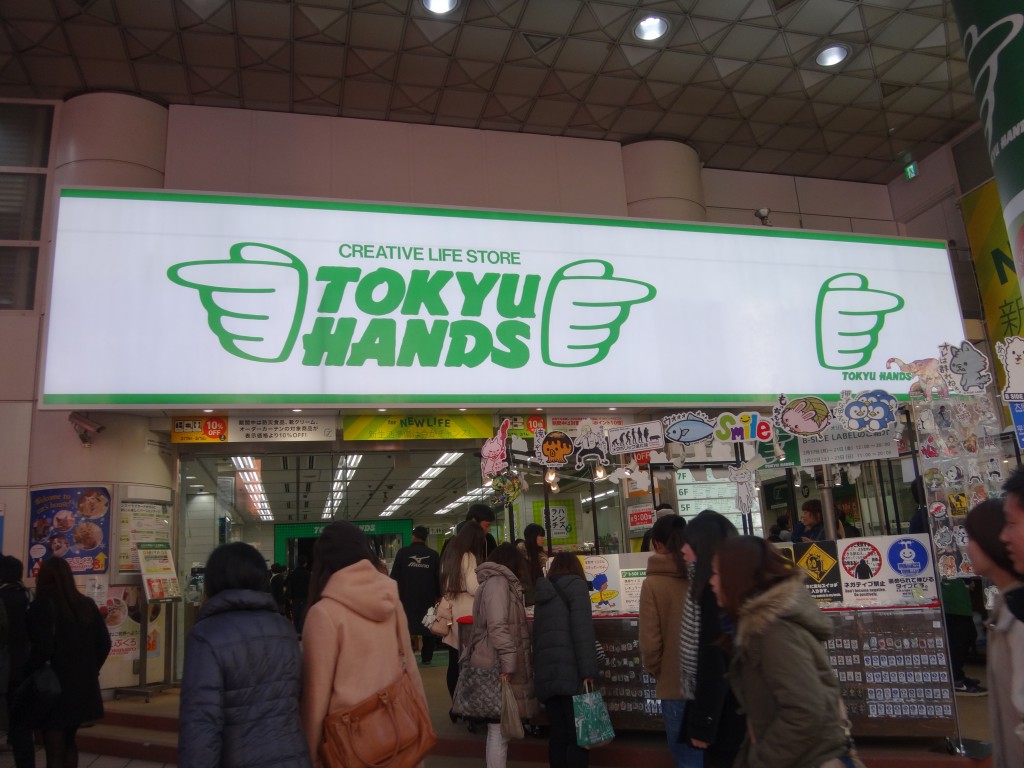 On the 8th floor of the building is one of Tokyo’s most popular cat houses – Nekobukuro. For ¥600 per person (or ¥1000 for a couple, babies get in for free), you can spend all day petting exotic, beautiful cats that are pretty friendly (as far as cats go). This was actually the highlight of our entire Japan trip.

Jellybean petting a cat in Nekobukuro 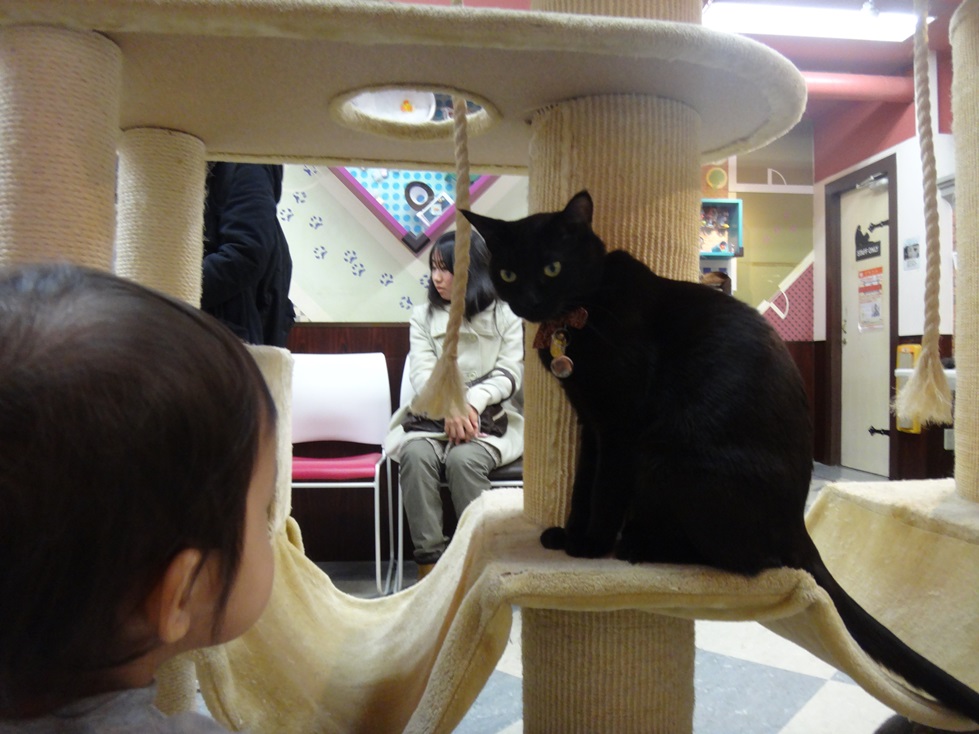 Staring contest with the black kitty at Nekobukuro

Ikebukuro is also said to rival the popular tourist destination of Akihabara in electronics. You will find huge electronics shops left and right as soon as you alight the train.

Also in Ikebukuro is the huge department store Seibu. It is popular for the KitKat Chocolatory, it is the only boutique store for this chocolate brand in the world. Different days offer different flavors. We were only able to sample the two flavors that were available late in the day: Cheesecake KitKat and Chilli KitKat – both were worth the trip to the city. The KitKat Chocolatory in Seibu, Ikebukuro. The only KitKat boutique store in the world.

Day 3: Ginza
Ginza is the jump off point for the Tsukiji Fish Market. This is an activity for early risers. The tuna auction starts at 4am but spots are limited to 120 tourists a day. If you want to catch all the action, you need to be up by 2:30 and grabbing a cab to the biggest fish market in the world before dawn.

Ginza is, by far, the most expensive city in Tokyo. It is the prime shopping spot for luxury brands. On the Chuo-dori strip were famous department stores like Misukoshi, Matsuya, Wako and Matszakaya stand. The world’s largest Chanel boutique is located here as well as Tiffany with Tiffany Café and a Dunhill Concept Shop. For serious shoppers, this is heaven.

But we went to (and stayed in; see Dai-ichi Hotel Annex) Ginza because of Nishi street. This is where the flagship store of Sanrio is (in the Nishi Department Store). They have a whole floor devoted to Hello Kitty! . For our two-year-old (and for her child-at-heart mommy), this was heaven. There were Hello Kitty items you won’t find anywhere else in the world from the ¥150,000 MacBook Air with Swarovski Hello Kitty detail to the ¥18,000 Hello Kitty engagement ring. 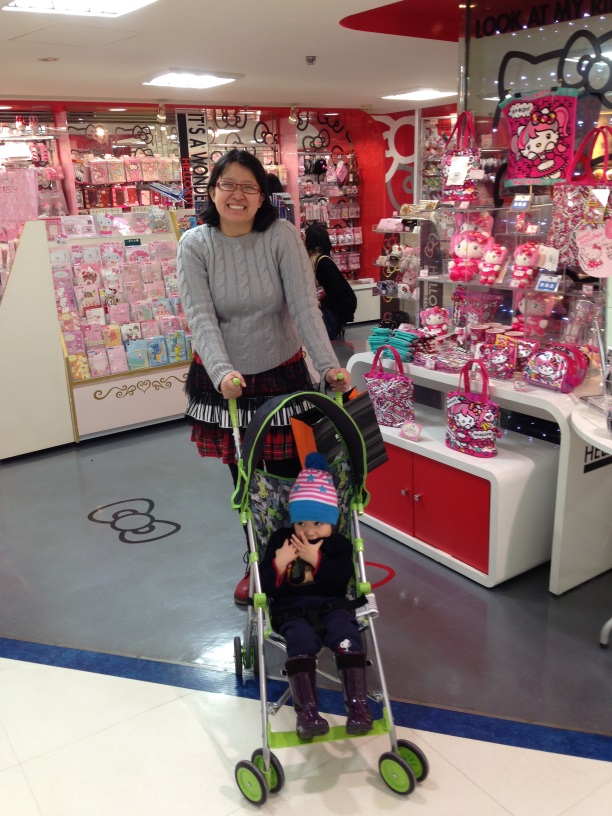 Along the same street are the 8-storey Sony Building showroom and the 5-storey Apple building. These are great places for pre-teens to visit. We were there two days before the official launch of PlayStation4 and the Sony building’s top floor was just for demo and testing several units and games. At the Apple Building, we enjoyed playing around with their different gadgets. They even had a theater where you can watch demos of the latest technology, and rest your weary feet. The Apple Showroom in Ginza, Tokyo Inside Sony Building: Playing with PS4 before it launches to the public in 3 days.