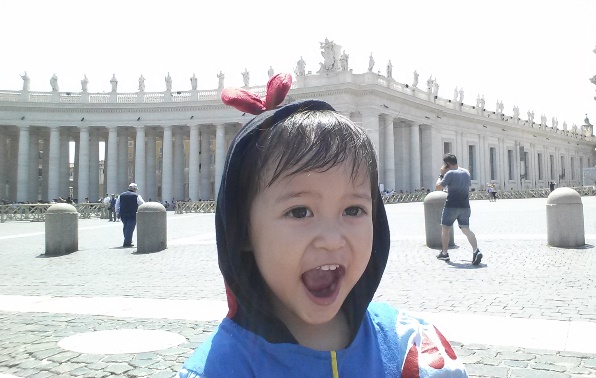 We spent 3 days in Rome during our recent European vacation. There is much to see in this see, but I wouldn’t exactly call it baby-friendly. First off, hotels in Rome are expensive so we opted to stay with a gracious host/friend. This is a first for us since we usually spend a chunnk of our travel budget on hotels and serviced apartments. It feels nice to have someone to rely on when on holiday in a strange city where you don’t speak the language. Plus, we spent our hotel budget on sight-seeing and dining instead.

The first thing you should do when in Rome is to eat!

It is just a fabulous place for food. My daughter tasted the authentic versions of two of her favorite dishes: Spaghetti and Pizza. It’s not what one more used to the American version of this dishes would expect. The ingredients were basic but flavorful. The simplicity in which these dishes were cooked were so humbling that you get to experience all of that Roman experience just by eating out. 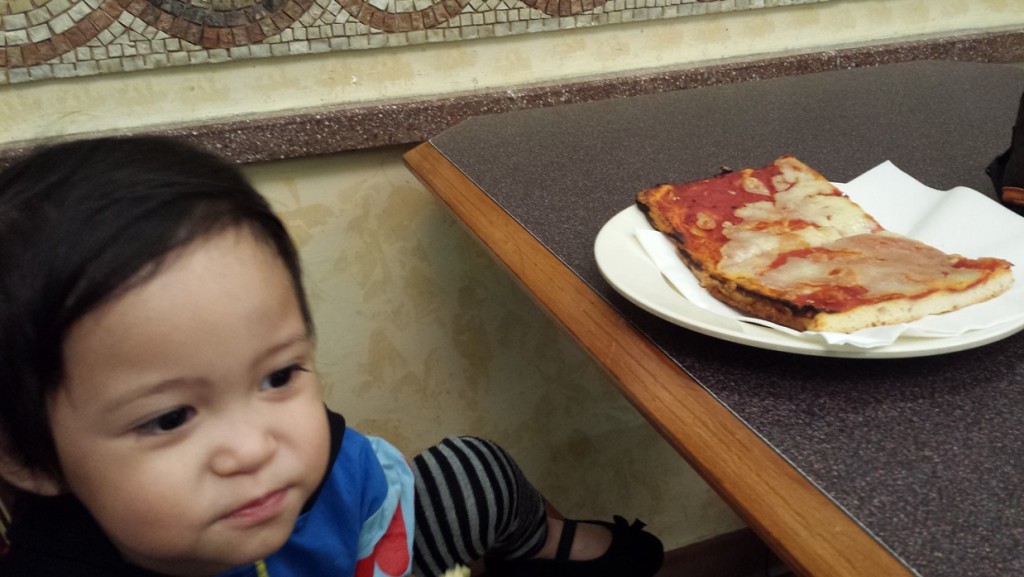 And don’t even get me started on the gelati. Whether you get it from a street corner truck, in a bar or inside the Vatican, it was just amazing. It’s not ice cream. It’s not sherbet. It’s something in between that bursts with so much goodness you forget your own name. I think we did 3 or 4 gelati breaks a day. 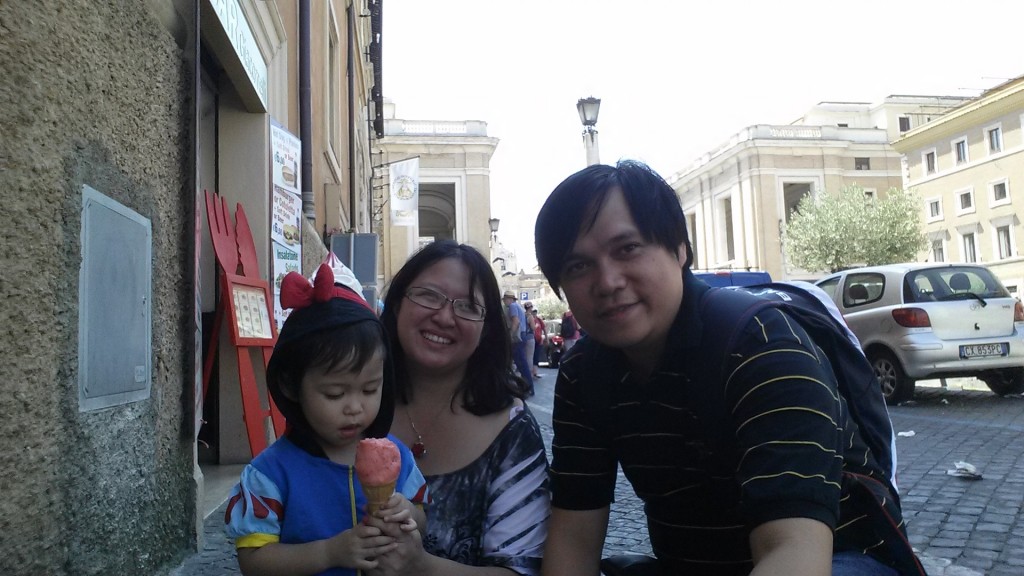 We could eat gelato all day!

Most people in Rome are considerate of those traveling with a baby. For instance, in a bus when they see you standing with a baby, everyone around you will automatically offer you a seat — young or old. It’s even funnier when there are young people busy with their phones or in conversations and older ones see them not offering their seat, they really get a screaming from the older folk.

The difficulty comes in the actual transportation. There is a subway system but most commuters take the buses as there are several lines crisscrossing the entire city. A word of warning though, bus drivers are NOT friendly at all. Our host walked us to the station and talked to the driver in Italian to drop us off near the Vatican entrance. Of course he did not. And to make matters worse, when my husband stood beside him to ask where it is, he started shouting in Italian. After ending up in the terminal, we did find our way to where we wanted to go. It was very fortunate for us that there were several friendly Filipinos riding the bus that day. One of them even walked us right to the Vatican gate. So a good tip when you are trying to find you own way around the city, get a day pass for the bus or one-week pass if you are staying longer. Just remember to validate it for the day on the first bus you ride as this would result in a fine if you don’t. Also, grab a map that shows the bus numbers for specific tourist destinations. I thought the first incident with the bus driver was just a one-time thing, but I was wrong. My husband was scolded / ignored by bus drivers around 5 times during our trip. Some of the Filipinos we met said that it’s common because they don’t really understand or speak English and sometimes its just the way they speak, as such it is best to find your own way when commuting.

Rome is a densely populated city plus the influx of tourists is unbelievable during the summer months. Expect big crowds or super long lines at each tourist destination. With the number of people in the area, expect also that you may get stuck in traffic jams here and there. We spend an average of 4 to 5 hours a day stuck in buses trying to get from one destination to another. You will also be warned of pickpockets as this often happens in the city. 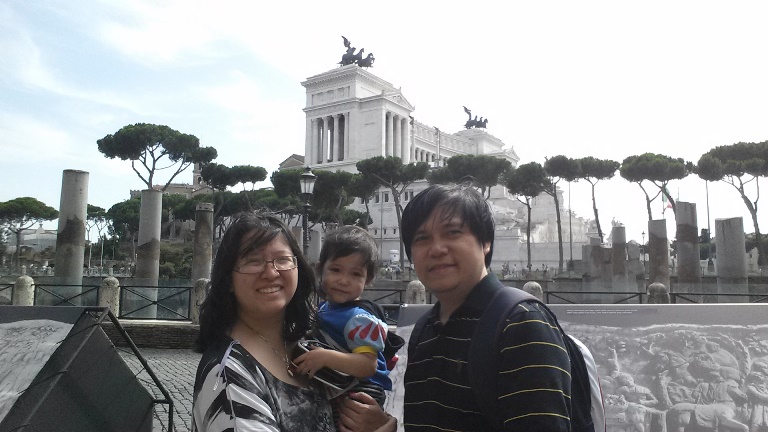 Roma Central — along the ancient forum structures of Rome. 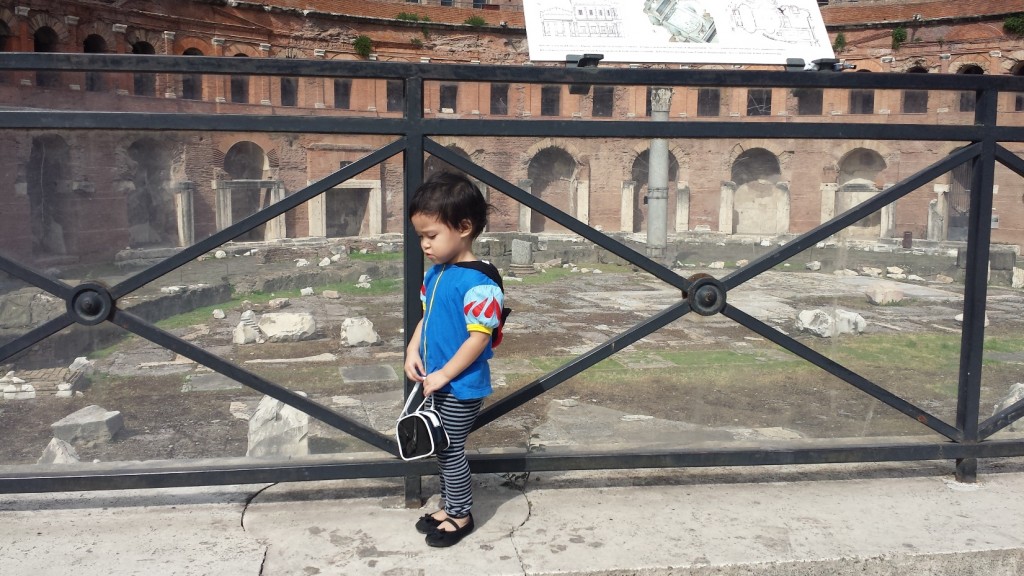 Jellybean enjoying a stroll along one of the pedestrian streets while looking out into the enclosed ancient structures.

Don’t miss out on the Colosseum, Trevi Fountain and of course, the Vatican (which we will rate separately). For those with toddlers who love to run and climb, they will have a grand time chasing pigeons and just enjoying the cobblestone streets. The way to the Colosseum is a a closed pedestrian street, Fori Imperiali runs about 1.1 kilometers and while enjoyable to walk at a leisurely pace, your toddler may soon tire out. There’s a nice gelati shop on one side where you can also find the Tourist Information Center. 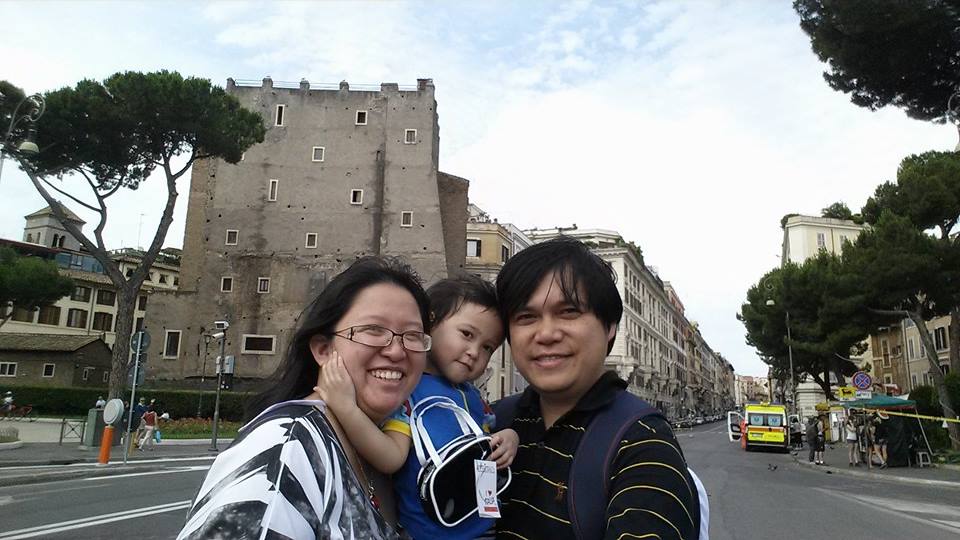 The Colosseum itself is a sight to behold. This 2,000 year old forum is where many mock battles, gladiator contests and other public spectacles were held in the ancient times. For those with smaller children, there is an elevator that could take you to the third floor at the very back. Of course we were not told about this and only found out after we climbed 3 flights of uneven steps. Inside, my daughter (unaware of the bloody history of the place), enjoyed jumping from one rock to another and dangling near the edges secured by wires and flimsy bars where she could fall two to three stories high…yes, it could trigger any parent to either go insane or have a heart attack. 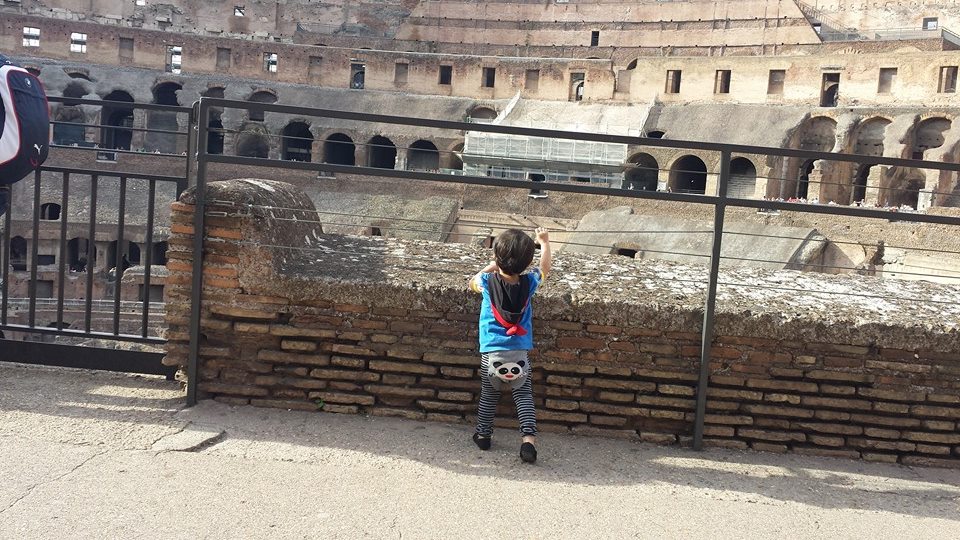 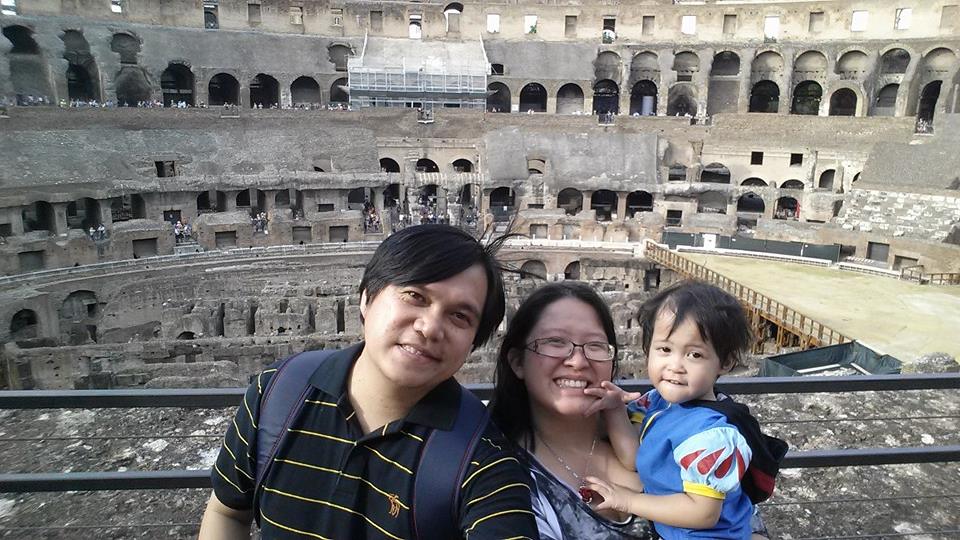 Inside the Roman Colosseum 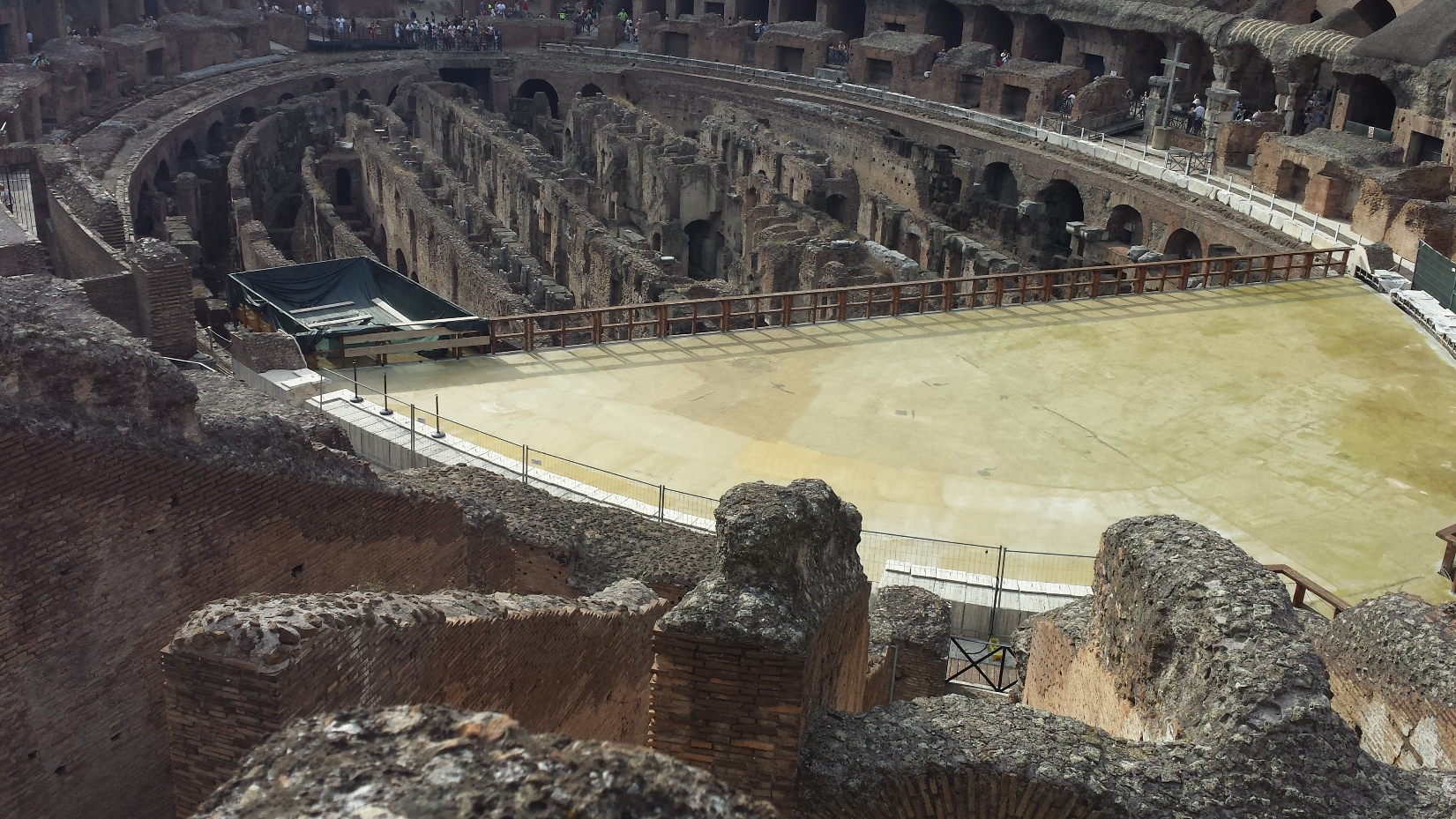 View from the top of the Roman Colosseum.

The Trevi fountain is inside a few small streets near nice little cafes and spice shops. Unfortunately, they were doing construction when we were there. It was closed off in plexiglass but we still saw how amazing it was even with no water. The funny thing was, people were still throwing in coins and the construction workers kept shouting “Oi” and “Ei” because they were getting hit.

I would give Rome a 7/10 in our Baby-Friendly Scale. It is a good experience for young couples and tour groups, but you are traveling with small children, you need to plan your vacation well. The traffic situation, the number of tourists as well as the rude bus drivers make the city difficult to navigate with a toddler. But the amazing food and the breathtaking ancient sites are worth the hardships.